Static Plate Load Test can be utilized in earthworks and foundation engineering, as well as road construction in order to determine load settlement lines and by this to evaluate the deformability and the load capacity of the soil. When using the static load tester to evaluate a soil layer, the circular load plate is repeatedly loaded and relieved by means of a load device, a hydraulic pump and pneumatic cylinder. This load is applied to the plate in 6 to 8 equal loading steps. Settlement of the plate is measured by the tester consisting of a carrier frame with a sensing arm and dial gauge. As a counterbalance, a heavy-weight vehicle is used.

The indentation of the load plate into the soil, generated with every load step, is indicated via the dial gauge. The settlement of every load step and the corresponding mean normal stress below the load plate appear as test values. Subsequent to the last load step the relief and a second loading similar to the first loading takes place. For the test evaluation these values are shown in a corresponding diagram as load settlement lines.

The modulus of deformation Ev is determined from the load settlement line of the first load (Ev1) and the second load (Ev2). By comparing the initial deformation from Ev1 and the subsequent deformation of Ev2 provides an indication of the compaction attained. The test results and the load settlement lines can be read with the HD-4139.3F Plate Load tester directly on the display and can be printed out immediately at the site via thermal printer or be revised later in the office on a PC. 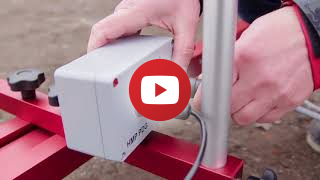