The Electrical Density Gauge (EDG) is a nuclear-free alternative for determining the moisture and density of compacted soils used in road beds and foundations. The EDG is a portable, battery-powered instrument capable of being used anywhere without the concerns and regulations associated with nuclear safety. Its user-friendly, step-by-step menu guides the user through each step of the testing procedure and cautions the user when values do not correspond to established curves for the material being tested. Easy-to-use, the EDG can be used as a construction aid to monitor day-to-day compaction operations by providing performance and measurement results highly comparable to those achieved with traditional methods, including the nuclear gauge and/or a sand-cone and oven moisture test combination. When conducting a test, the EDG measures and displays the results for wet and dry density, gravimetric moisture content and percent compaction.

The advantages of using the EDG are:

The EDG measures the electrical dielectric properties and moisture levels of compacted soil using high, radio frequency traveling between darts driven into the soil being tested. The dart's depth of penetration positively determines the depth of measurement. Darts are available in 4", 6", 8", 10" and 12" lengths. In addition, the darts have been designed with a taper, which ensures a continual positive contact with the soil for accurate measurements.

During the testing procedure, four tapered electrodes (darts) are driven into the ground in a cross pattern using the supplied template. Between the two sets of two tapered darts, four point-to-point electrical measurements are made and the electrical characteristics averaged. The dielectric properties that are measured by the unit are compared to a "soil model", which has been developed and programed into the unit prior to testing. These soil models are required only once for each soil type. The soil model is used as a calibration reference during the testing procedure. It is developed by establishing a curve of measured dielectric properties for different densities and moisture combinations of the actual soil to be tested or a similar material. This soil model is used by the unit through a proprietary correction algorithm to automatically determine the wet and dry density, gravimetric moisture content and percent compaction values for the material being tested. Soil models can be named using the unified soil classifications listed in the drop-down menu or unique names can be entered using the alpha-numeric keypad. In addition, the temperature probe, which is inserted into the material being tested ensures accurate results by compensating for changes in recorded temperatures. Similar to nuclear gauges, proctor numbers for optimum compaction may be input into the gauge, which would allow for percent compaction to be automatically calculated and displayed at the end of each test. The Proctor numbers would be input into the gauge during the development of the soil model. When determined, this value is entered into the EDG to enable the computation of percent compaction.

EDG Software
EDG Software will allow you to communicate effortlessly with your EDG gauges and only requires minimal setup by the user. EDG Software provides a complete solution for the acquisition, storing, and presentation of Job and Soil Model data. EDG Software works in conjunction with Microsoft Excel to present test data in easy-to-read Excel workbook format files, which can be evaluated directly or sent to any computer using Microsoft Excel. Jobs can be grouped together within projects for organization and reporting.

For additional information about the Electrical Density Gauge, click here. 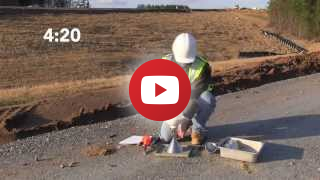 This video was designed to provide you with a quick step by step guide of how to develop a soil model for use with the EDG, to determine the density, moisture and percent compaction of construction materials.